Twitter is more than just the latest social media darling to soar onto New York Stock Exchange under the symbol #TWTR. The micro-blogging social network can be one of the quickest and most effective ways to share your brand’s news.

Let’s look at the Tweets stats: Twitter boasts 230 million active users posting an average of 500 million Tweets every day. They are talking (and listening) about everything from mobile apps to cars to scientific breakthroughs to news, and of course businesses and brands.

Less than five years ago press releases were the main “go to” strategy to share company news and get the word out to the journalists, customers, investors, prospects and search engines. Today we have an almost dizzying choice of ways to spread social news, with Twitter being one of the leading ways to share 140 character news tweets and score social  authority and influence on an industry or subject matter.

4 Ways to Raise Your Social PR Stock with Twitter

1. Play Favorites – Want to get someone’s attention on Twitter? Favorite one of their tweets! It sends a nice message and will make you stand out in the crowd. The act of ‘’favoriting” can be a less public way to grab a blogger’s attention or get noticed by a person of interest.  The Twitter feature allows users to “like” a Tweet by clicking on a small star icon on the Tweets they find amusing or useful. Doing so both bookmarks the tweet and alerts its creator that they appreciate the sentiment without republishing it in their own streams.

2.Visual Storytelling on Twitter – Move over Instagram, until now, seeing an image attached to a Tweet has required tapping on a link, leaving Twitter out of step with visual social networks like Facebook, Tumblr and Instagram. That change began with last month’s update that inserts previews of images and Vines directly into tweets.  What can you do with this from a Social PR standpoint? A strong storytelling visual as part of your tweet can catch the eye of that researching journalist looking for story ideas and sources on Twitter.

3. Get Your Story Carded with Twitter Cards –Maximize your news story potential using Twitter cards (a few lines of HTML meta tags)  to attract a social reader and gain more publicity and visibility. Twitter cards are a way to display extra information that goes beyond the 140-character limit Twitter imposes. For example, here’s what a Twitter card for a recent Fast Company article looks like: 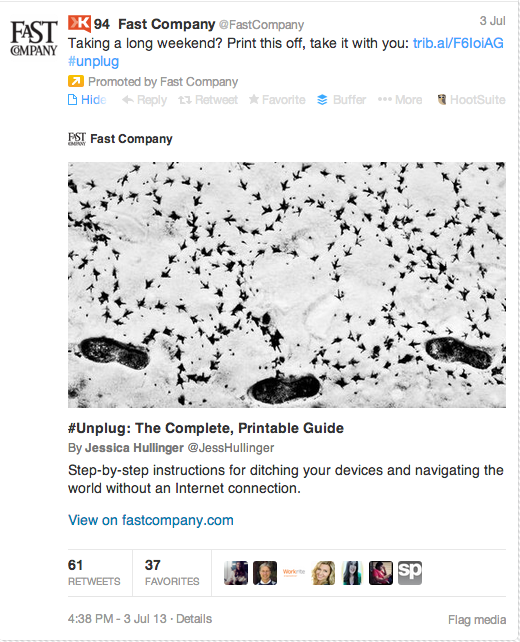 4. Twitter Profile Optimization for Media – How many characters does your bio have? Link to the news section of your website versus the homepage. Make it easy for media on Twitter to find your latest company news. Optimize the experience for the journalists and bloggers who are the most likely to be clicking on that link and send them to the news area of your website.

This site uses Akismet to reduce spam. Learn how your comment data is processed.

Get Updates by RSS

How #Yoga Can Save Your Social Media Obsessed Life. #Blab

1
Are you running social media or is social media running you? There's a yoga pose for that. Meet up with The Digital Dish co-hosts Lisa...
Read more
Public Relations

0
Mashable put together this fascinating infographic based on data gathered from 400 Facebook and Myspace users, giving fresh insight into love in 2011. Wherever you...
Read more
Online Marketing

0
I’m in public relations so of course I think content promotion is a necessity, but this week’s #SEOchat topped off with Honey Maid’s YouTube...
Read more